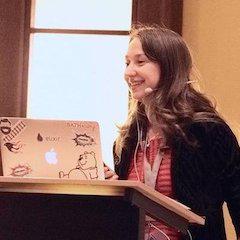 Building "Learn to Touch Type" Glove with Elixir and Arduino

Working as a software developer and having a degree in electronic engineering I always wanted to do something cool combining software and hardware. This desire took me on exciting journey from idea to building a prototype that would assist someone learning to touch type. In this talk I would like to take you on the journey from idea to final working prototype "learn touch type glove". It is constructed using a custom designed, flexible pressure sensor on under each finger tip. All sensors are plugged into an Arduino, which sends information to the server running Elixir. Elixir does the job of analysing the result coming from sensor and displaying it in the browser. Working on this project has sparked many new ideas which I would also like to share with you. I hope to share enough knowledge to inspired you to start playing with plugging in together hardware and software for your own software projects.

I am working as a Software Engineer in Southampton. I have a degree in Electrical Engineering from Ukraine, and I am passionate about challenges and making learning fun. In my free time I contribute to open source and working on my own software/hardware projects. I like the idea of mixing hardware and software together. That's why my personal projects include integration of Arduino, bunch sensors with visual output to the browser. This allows me to write fun games and enjoy "testing" them. As a social person, I like to build social games, which include "testing" with friends. After sipping a little bit of Elixir (programming language, not actual booze) I started to fell in love with it. That's the explanation to why all my latest projects include Elixir.